Are you in the market for a slim, light, and power-packed laptop? We test an upgradeable machine from Tuxedo. By Mike Saunders

Some Windows and macOS fans joke that Linux users have no need for svelte, lightweight, and powerful laptops. After all, we like taking things apart and poking around inside, right? A typical Linux lap­top should be a 3kg beast with replace­able everything, two parallel ports (ever tried PLIP networking?), and five hard drive bays to store all of our favorite dis- tros. And it doesn’t need a fast chip, be­cause we can just run Puppy Linux on it.

Except, of course, that is far from the truth. Sure, we Linux users like to get the most out of our hardware and value upgradeability and longevity over shav­ing off every single millimeter where possible. But we shouldn’t have to com­promise. Why can’t we have a slim, powerful, and upgradeable laptop that also runs the very latest Linux distros? This is what Tuxedo aims to offer with the InfinityBook S 14 v5 (Figure 1). Tuxedo Computers GmbH, based in 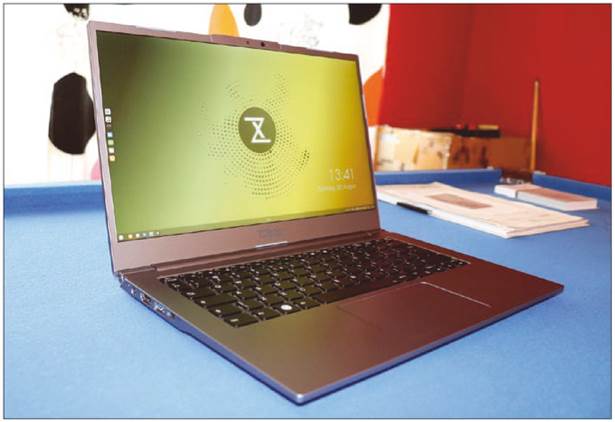 Augsburg, Germany, has been in the Linux hardware business for over 15 years. This particular model – the Infin­ityBook S 14 v5 – is “made in China, Assembled in Germany,” and the com­pany describes it as lightweight, slim, elegant and very persistent. It’s avail­able in various configurations; the one we tested for this review costs EUR1,329 (see Table 1).

The first thing you notice with the Infini­tyBook is how light it is. For a machine with a 14-inch display, you expect a bit more heft, but at 1.1kg (2.4lb) it feels fantastically light and portable. Indeed, it’s so light that when it’s flat on a table, you can’t fully open the screen by solely lifting it with a finger – you need to prise the machine apart.

Still, the hinge feels sturdy, as does the magnesium chassis, with virtually no flexing on the base. The screen per­mits a bit more bending, but it is still solid. Overall, the InfinityBook’s build quality and finish is excellent – and there are no annoying stickers on the palmrests to remove.

Size-wise, the laptop is 322x217x16.5mm. When placed on a flat surface, taking into account the rubber feet on the un­derside, it rises 2cm above the surface at its thickest point. There are thinner ul­trabooks out there, but the InfinityBook is still decently slim.

But what about the aforementioned maintainability and upgradeability? The InfinityBook does pretty well here: Re­move 12 regular crosshead screws from the panel on the underside of the screen, and you get access to the replaceable Samsung RAM, replaceable Samsung 970 EVO Plus SSD, and the replaceable (albeit with soldered cables) Intel AX200 WiFi card (Figure 2). With the RAM being expandable up to 40GB, the ma­chine should be usable for many years down the line. 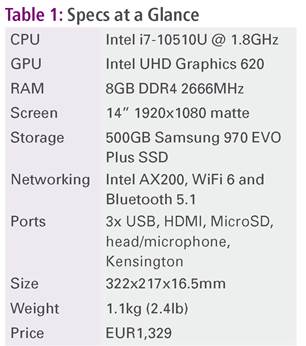 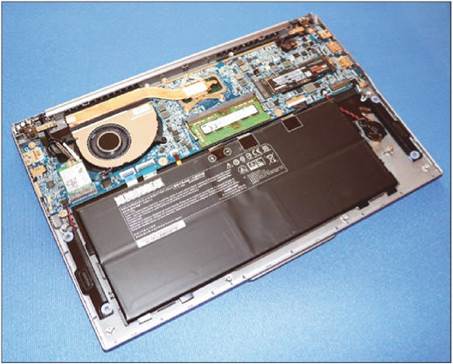 Figure 2: Pop off the back by removing a few screws, and you can swap out the RAM, SSD, and network card.

350 nits and a contrast ratio of 1200:1. At its very brightest, it still looks a bit dim compared to a 500-nits display on other high-end machines (such as a MacBook Pro that we used as a com­parison). But for most use cases, this isn’t an issue.

Meanwhile, the InfinityBook’s chi­clet keyboard has decent travel and feels solid and satisfying to type on, without generating much noise. We’d prefer a bit less space between the in­dividual keys. On our review unit, we noticed a glitch: duplicated pipe-and- backslash keys, one on the right (next to the Enter key) and one beside the left Shift key. The whole keyboard is supported by two levels of back light­ing (enabled using Fn + Space). And there’s a special Tux key – not just a sticker over a Windows logo!

Underneath lies a spacious and re­sponsive 10.4×6.4cm trackpad, in “div­ing board” style. In other words, it’s eas­ier to click on the bottom parts of the pad than on the top. Clicking is rather loud, however. Even if you opt for the light tap ap­proach, just pat­ting your fingertip on the pad rather than depressing to generate a me­chanical click, it produces a slight vibration and some noise – es­pecially at the bot­tom of the pad. In terms of hard­ware, this was our only disappointment with the machine, which is otherwise superb. In a busy of­fice or home, it’s not a huge deal. How­ever, in quiet environments, the trackpad noises can be quite distracting.

The InfinityBook ships with TUXEDO_ OS, which is basically Ubuntu 20.04 with the Budgie Desktop and a few other tweaks. It’s also possible to order the machine with openSUSE.

By and large, Ubuntu runs well on the laptop, but we encountered a few annoy­ing gremlins. For instance, when sus­pending and resuming, the desktop flashes briefly (and brightly) before the lock screen appears, which is rather off- putting during regular use. It doesn’t have a massive impact on usability, but, for a high-end machine, we’d hope for a slicker overall experience.

Also, the keyboard backlight level isn’t maintained after suspending and re­suming. In one instance, we had the display settings opened and closed the lid. Upon reopening, the CPU spiked, ramping up the fans to jet engine lev­els, and we had to force quit the Set­tings app. Otherwise, Ubuntu runs well on the machine.

Stereo speakers are mounted on the underside, towards the front. They gen­erate an adequate amount of volume at their max, but are lacking in bass. You wouldn’t want to use it to watch concert streams, but, for casual video watching or gaming, it’s good enough. Above the screen is a 1.0 megapixel webcam (at­tached to a white LED that shines when it’s enabled), accompanied by an IR camera.

As mentioned earlier, the laptop is available in several configurations – our review unit shipped with a quad­core Intel Core i7-10510U chip from the “Comet Lake” family, running at 1.8GHz, with 8MB cache. This is backed by 8GB of DDR4 2666MHz RAM. Communication is provided by an Intel AX200 chip, with dual-band WiFi 6 and Bluetooth 5.1.

In our test, we could watch 1080p 60fps YouTube videos without the Infini­tyBook breaking a sweat – the fan didn’t ramp up. With some other high loads, the fan noise was noticeable, but not an­noying. We found that the fan changed speeds quite often though, adapting to the loads, which always caught our at­tention. A smoother transition between fan speeds would be preferable.

Airflow is handled entirely through the hinge area, which is a setup we really like; you can use it on a bed or sofa without worrying about blocking vents on the underside and triggering heating problems. The laptop gets moderately hot under a high load, but never un­pleasant to the touch.

In terms of battery, the InfinityBook ships with an integrated 73Wh polymer smart lithium-ion battery. Tuxedo claims a whopping 24 hours of battery life, al­beit when the machine is left idle with minimum screen brightness – and we can confirm that. To recreate a more real-world usage scenario, however, we tested playing 720p YouTube videos with medium brightness and achieved almost 14 hours. When suspended, the laptop loses around one percent of battery every hour.

The laptop’s charger is a slim 10x5x1.5cm mini-brick, which brings the battery back up to 100 percent in 2 hours and 15 minutes. The battery gets quite hot during charging, though.

With its excellent build quality, slim and lightweight chassis, beefy battery, good keyboard and screen, and possibil­ity to update the RAM and SSD in the future, the InfinityBook S 14 v5 is a great machine for the price. It loses a couple of points due to the noisy track­pad and a few software glitches (see “The Software Side” box), but in our two weeks of testing, we were largely very happy with it.

Author: Mike Saunders has been using, advocating, and writing about Linux since 1999. He was one of the founders of Linux Voice and gets nostalgic thinking about it.