HP’s new Victus brand offers a more affordable alternative to its high-end Omen line, and this machine is one of the cheapest gaming laptops we’ve seen for ages. The low price doesn’t mean cut-back silicon either. Nvidia’s GeForce RTX 3060 has a peak limit of 95W in this rig, which is right in the middle of the GPU’s thermal design power range, and AMD’s Ryzen 7 5800H is a reliable performer that has a mid-range 45 W thermal envelope. Read our HP Victus 16-e0097nr Review. 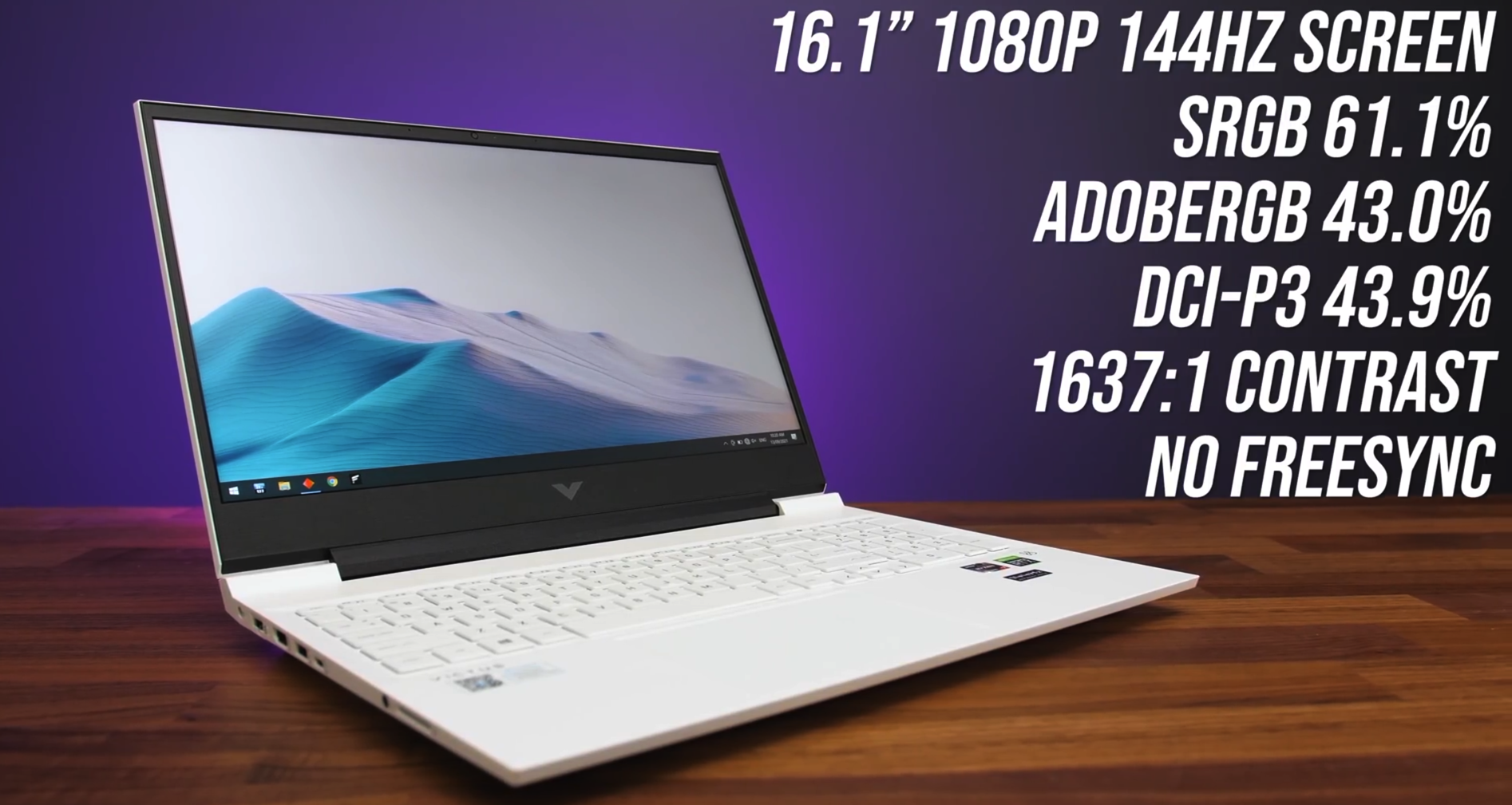 Elsewhere, the HP has 16GB of dual-channel 3200MHz DDR4 memory and a 512GB Micron SSD. That drive offers solid read and write speeds of 3,258MB/sec and 2,784MB/ sec, but it will fill up quickly if you install a few games. Happily, there’s a spare M.2 SSD bay on the inside.

The other notable component is the 16.1in screen, which is a little larger than a conventional 15.6in panel – a move that HP says improves immersion. That extra half an inch doesn’t deliver transformative change, but it’s noticeable and supplies a little extra room without the sheer size of a 17.3in machine. Elsewhere, the screen’s specification is conventional – it’s a 1080p IPS panel with a 144Hz refresh rate.

The Victus is available in white, black and dark blue designs, and our white sample looks eye-catching. Get hands-on, though, and the cost cutting is apparent. The machine weighs 2.5kg, so it’s heavier than most rivals, and build quality is mediocre – the wrist rest rattles, and the desktop distorts if you put any pressure on the rear of the panel. You’ll want a sleeve to keep this machine protected out of the house.

In terms of connections, you get three USB 3.2 Gen 1 ports and a Type-C socket that handles DisplayPort, plus an SD card reader, HDMI 2.1 and Gigabit Ethernet, but there’s no Thunderbolt and no quicker USB ports. There’s a webcam, but it doesn’t support Windows Hello, and you also get dual-band Wi-Fi 6 and Bluetooth 5.2. Meanwhile, the speakers have a punchy mid­range, but the top end is tinny and they lack bass.

Ergonomically, the HP is fine but not brilliant. The keyboard has fast, snappy buttons that deliver crisp gaming action alongside a numberpad and a button to open the Omen gaming app. The cursor keys are small, though, and the Power button is sandwiched between the F12, Delete and Backspace buttons. That key requires more force to push than the unit’s other buttons, but that’s an awful location for it, as it’s too easy to accidentally hit while gaming. The keyboard doesn’t have LED backlighting either, and the touchpad rattles and pushes down too far.

The HP might be a little rough around the edges, but its 95W RTX 3060 performs well. It played Assassin’s Creed Valhalla and Cyberpunk 2077 with 99th percentile minimums of 40fps and 37fps, and the latter score increased by 3fps with Medium ray tracing and DLSS. Those results don’t quite hit our frame rate targets, but they’re good for a cheap gaming laptop – you’ll only have to drop the settings a little to get smoother frame rates. 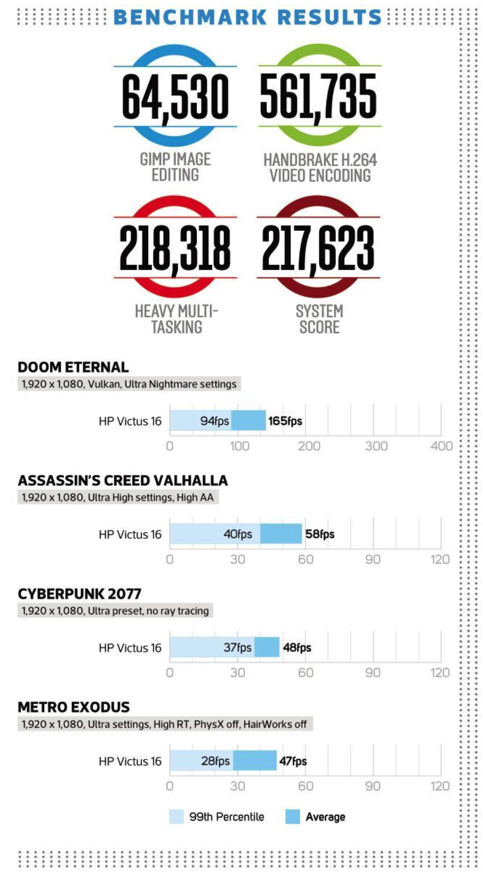 Meanwhile, the HP’s Doom Eternal 99th percentile result of 94fps was bolstered by a 165fps average. That’s fast enough to take advantage of the 144Hz display, which bodes well for performance in undemanding esports titles. HP’s machine has a Performance mode that adds a few extra frames per second to games, and its Quiet mode retains enough pace for casual games and esports titles at sub- 100fps frame rates.

The Ryzen 7 5800H is a rock-solid bit of silicon too. Its benchmark results are consistently towards the top end of the speeds we expect from this chip, and its multi-threaded results are better than anything Intel can currently muster. This machine also has a battery that lasts for seven hours when handling everyday work tasks, although you can shave a couple of hours from that result for creative work and it only lasted for 90 minutes when gaming. 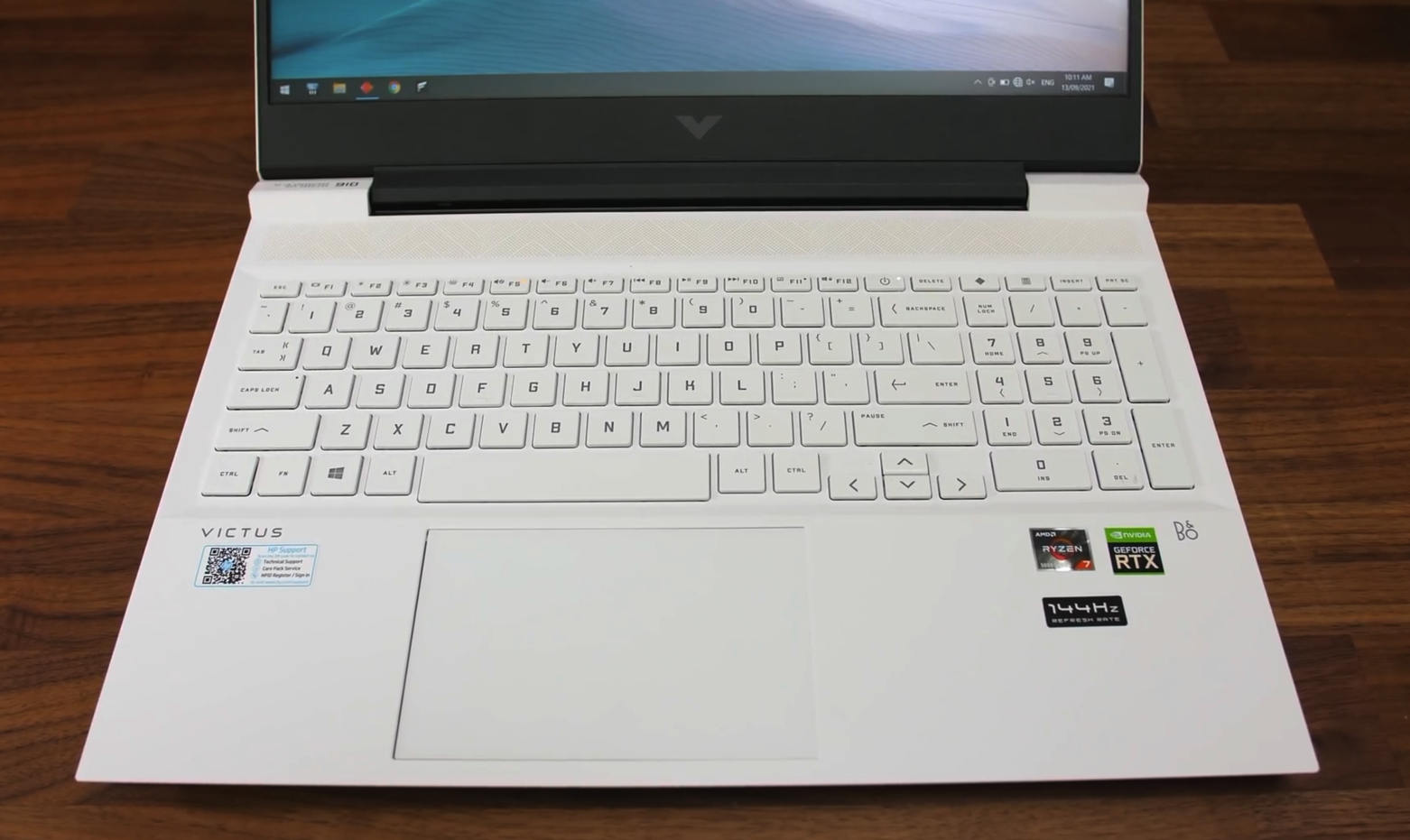 The GPU’s delta T never rose beyond 44°C either, and the HP was quieter than most gaming laptops. The exterior remained warm rather than hot too. Noise levels were fine when we stress-tested the CPU as well, and the chip attained top single-core and multi-core speeds of 4.3GHz and 3.6GHz respectively – virtually identical to the chip’s theoretical boost clocks. The only minor issue here is the processor’s high delta T of 76°C during an all-core stress test, but it never caused instability.

The downside is the quality of the Victus’ 16.1in display. The peak brightness of 240cd/m2 is poor, the delta E of 4.9 is mediocre and the screen only rendered 58.8 per cent of the sRGB gamut. These results leave the panel looking drab. The black point of 0.14cd/m2 is good and it means you get a solid contrast ratio of 1,714:1, but that depth is wasted on a display with such a narrow colour gamut and an absence of brightness. You can play games on this panel, but they’ll never look vibrant.

HP’s machine delivers impressive gaming and computing power for a great price, and the 16.1in screen is a good size too. Battery life is good in some situations, and the Victus is never loud. It fails to impress in some areas though – the display has underwhelming quality, the keyboard has irritations, build quality is mediocre and connection options are average.

If you can stretch your budget, we recommend paying the extra £ for the Lenovo Legion 5 on our Elite list, which offers a faster RTX 3070 GPU, RGB-backlit keyboard, 165Hz screen and better USB connections in a stronger, lighter chassis. However, the HP Victus 16’s decent performance for the price still makes it worth considering if your budget is limited to only just over a grand and you’re aware of its shortcomings.