But it packs a lot into that small form factor. Included is 64GB of memory, a 2-inch capacitive

LCD touch screen and support for almost all file formats – going up to 24bit/192kHz and including native DSD, ALAC, WAV, FLAC etc via its Cirrus Logic CS43I3I digital-to- audio converter that also handles the headphone output.

Compared to something like an Astell&Kern or a FiiO player it’s like having a Mini compared to a Bentley Continental! But, that actually makes it ideal for the daily commute as it takes up little space and you hardly know it’s there.

On the bottom is the 3.5mm earphone jack plus a USB port for transferring music, while side buttons include power on and off, volume and the ability to slide back and forward between tracks.

Oh, and there’s also a voice recorder plus a radio function which takes some beating in something so small.

To charge the Cowon takes around I hour 40 minutes for its inbuilt lithium-ion battery from which it ran – for me – three days without any problems.

The compact size, though, is useful for those of us who don’t want to carry around big players. It took me a couple of days to get used to the small-sized buttons but once I became familiarised everything was natural and intuitive.

The display screen, while small, is also well-lit – text and graphics easy to read. Album artwork shows up well and track listings are clear and legible. There’s also a function to make playlists.

Included in the package is Cowon’s proprietary JetEffect and BBE software that in effect work like tone controls if you choose to use them.

JetEffect is impressive in boosting bass on hard-driving tracks that need a little enhancement through cheaper in-ear headphones.

That said, with quality monitors like the Noble K10s – my earphones of choice – I preferred turning the sound processing off. 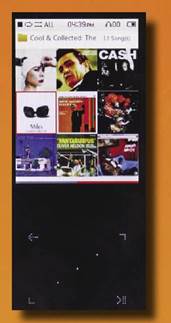 However, it’s good to have this option for how you like to listen and what part of the sonic register is most important to you. I’d definitely recommend experimenting with it – if it works for you fine, if it doesn’t then just ignore it.

Loading up the iAudio Hi-Fi with some of my favourite high-resolution tracks and plugging in the Noble K10s proved its sound has a pleasing and well-balanced quality.

Like most other Cowon players I have listened to, it does not exaggerate either the low-end or the top-end. Instead, it is smooth and steady. Tommy Smith’s detailed ‘Sound Of The Insects’ came over with excellent balance on his saxophone. Not just nuanced but also hitting the mark in terms of timing. The drumming and little chiming details behind the track were also excellent.

On the solo that forms the centre of the piece, Smith’s notes soared – taking the track away 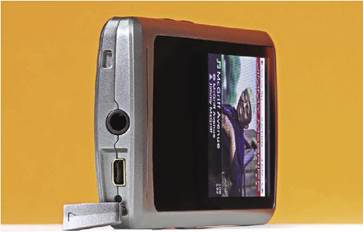 The underside of the Cowon has a 3.5mm headphone socket, plus a USB socket for importing tracks and charging.

from my head and into a different landscape altogether.

The only thing I missed was a little detail from the Cirrus Logic chip. The likes of the ESS Sabre32 DACs drag more from high- resolution digital – but of course they cost more.

When switching to a pair of Bang & Olufsen Beoplay H3 in-ear headphones the differences were not so obvious. Listening to Amy

The small screen at top shows album artwork, artist and song titles, while below sit controls to move between tracks and files. Its compact form factor means it takes a while to get used to, but once mastered the interface is intuitive.

Winehouse’s ‘I Don’t Want To Go To Rehab’ the two sets of headphones sounded similar. Both are excellent but the Cowon didn’t have the resolution to bring out the difference in their sound. The Nobles are crystal clear, the B&Os have a beefier sound.

But that’s not to play down the abilities of this new Cowon. It does what it does very well indeed and in a shape and at a price that will appeal to many people.

One thing I did find annoying is that once pocketed the Cowon is a bit hard to control with my fat fingers – the side buttons being very small. If you are deft, this may not be a problem – it’s horses for courses in this regard.

Sound-wise, though, the Cowon’s small iAudio certainly hits the mark.

It packs a lot of technology into a small space to give a pleasing result.

Small, potent and powerful. If you want a digital audio player to fit easily into a pocket, handbag or briefcase then this Cowon is for you. Only problem? The buttons and screen are small: good eye sight and a deft touch are required.

The song menu is easy to read, scrolling through various tracks simple.

Output measured 2V, oddly with volume limiting on or off, but this is plenty enough to go very loud with all headphones.

The iAudio measured well enough for a small player of very low price, but it is slightly below CD quality. 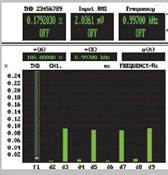 Excellent little DAP that is small but sounds refined.