A versatile security suite offering great protection in a package that’s easy to use and reasonably priced. Read our Bitdefender Internet Security 2020 Review.

Bitdefender is one of the most effective security suites around. In AV-Test’s tests, it achieved a perfect 100% score for malware protection, and dropped only a few marks for AV Comparatives. While this doesn’t quite match Norton 360’s flawless record, Bitdefender did better than Norton in the false-positive test, making only a single mistake across all tests and the suite is nimble too. with a creditable 94% rating for system performance. 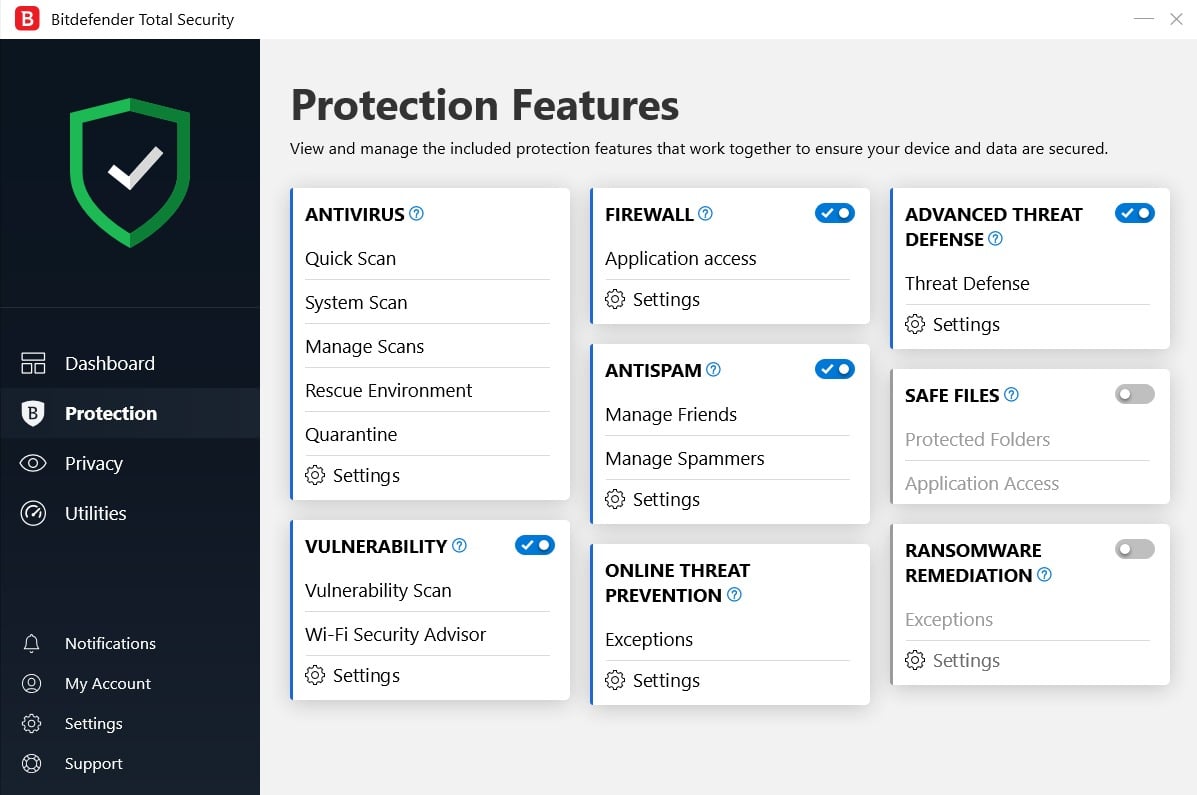 Bitdefender will appeal if you’re the sort who likes lots of features and options to play with. The customisable dashboard gives access to a selection of core features, and the Protection and Privacy panes offer plenty more to explore. The sheer number of things to click on might seem daunting at first, hut everything is laid out in front of you in a way that makes it easy to grasp the features on offer and find what you’re looking for.

As you’d expect, the Protection pane includes options for launching and configuring various types of scan, as well as settings for web based and behavioural protection. It’s also here that you’ll find Bitdefender’s own firewall: by default, this runs quietly in the background, relying on its own intelligence to decide what should be allowed to access the internet and what should be blocked, but you can review its decisions, set up your own rules and even enforce different behaviours for different networks. There’s also a Vulnerability Scan tool that warns you about missing updates for Windows and applications, and highlights weak passwords and insecure networks.

One last protection feature that’s worth highlighting is the Bitdefender Rescue Environment. Many security suites let you create a bootable rescue CD or flash drive, but Bitdefender goes a step further and automatically sets up a minimal rescue environment on your hard disk. If you fear your PC has been compromised, it takes just a few clicks to reboot and fully scan your system from outside of Windows.

Switching to the Privacy pane exposes a miscellany of features, including Bitdefender’s locked-down Safepay browser. You probably won’t want to use this hardened app as your everyday browser, so we like the way you can set it to pop up only when you visit a banking or shopping site. You don’t need to buy the whole suite to get Safepay, though: It’s available as a free standalone download.

Similarly, the bundled VPN service (provided by Hotspot Shield) doesn’t add a huge amount of value to the package. Your exit node is automatically chosen for you, and throughput is limited to just 200M B per day. That, of course, is because Bitdefender wants you to pay to unlock unlimited data, but to be fair it’s not badly priced at £ a year for full access to servers in 27 different countries.

The final major feature is the parental controls, which are among this month’s best. Once you’ve remotely pushed the agent onto your child’s computer, you can monitor and approve the apps and websites they’re accessing, as well as enforcing screen time schedules and total usage limits. Install the app on their Android phone and you can also keep an eye on their contacts and track their location from the Bitdefender website.

A third program pane, headed Utilities, suggests that there might be even more to the suite, but clicking on it brings up an advert for Bitdefender Total Security Multi­Device, which adds cross-platform protection and a few extra system tools. It will cost you £ for five devices, but we don’t think it’s worth it as the extra tools only do the same jobs as free alternatives.

On the subject of price, if you buy direct from Bitdefender (the price above is from the PC Pro store, which is £  cheaper) then it automatically renews your subscription at a higher price if you allow it to roll into a second year. However, it sends warnings and you can opt out of recurrent billing at the point of purchase.

Either way. this is a superb security suite one that’s effective and loaded with features, yet at the same time lightweight and easy to use. Competing packages have their strengths, but as a one-stop all-rounder. Bitdefender can’t be beaten.